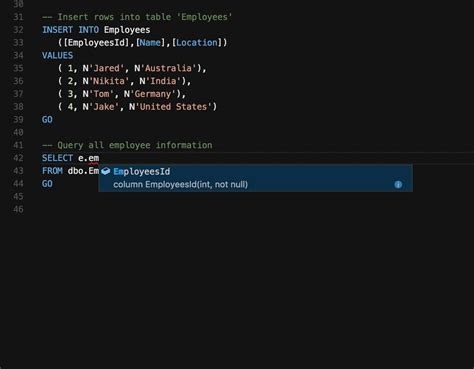 Evaluate the following PL/SQL. At what line number is the

Ask: Evaluate the following PL/SQL. At what line number is the error of the PL/SQL?
DECLARE

IF SQL % NOT_FOUND THEN

THANK YOU ME LATER

What causes most errors in a database? * a. sqlb.

Ask: What causes most errors in a database? *

—, Causes and Resolutions · Bugs in SQL server itself · Abrupt system shutdown while the database is opened

Evaluate the following SQL command SELECT * FROM jobs WHERE

Ask: Evaluate the following SQL command SELECT * FROM jobs WHERE job_title LIKE ‘Manager%’ Select one:

a.
The SQL command will produce an error.

b.
The SQL command will give an incorrect output.

c.
The SQL command should have ALIAS for the table to produce a correct output.

d.
The SQL command will produce a correct output.​

D. This should produce a correct output.

I’m making a number of assumptions here. More specifically, that this is likely referring to the standard MySQL syntax (or identical in this context) and that both tables “employees” and “departments” contain columns “employee_id”, “hire_date”, and “department_name”. If one or both of these assumptions are wrong, then the answer should be A (error).

This WHERE line compares the department_id from the “departments” table and “employees” table. It will only SELECT the “employee_id”, “hire_date” and “department_name” of the records FROM both tables IF their “department_id” values are the same.

In a database, a view is the result set of a stored query on the data, which the database users can query just as they would in a persistent database collection object. This pre-established query command is kept in the database dictionary. Unlike ordinary base tables in a relational database, a view does not form part of the physical schema: as a result set, it is a virtual table computed or collated dynamically from data in the database when access to that view is requested. Changes applied to the data in a relevant underlying table are reflected in the data shown in subsequent invocations of the view. In some NoSQL databases, views are the only way to query data.

is there a way we can directly execute the SQL

In some applications, having hard coded SQL statements is not appealing because of the dynamic nature of the queries being issued against the database server. Because of this, sometimes there is a need to dynamically create a SQL statement on the fly and then run that command. This can be done quite simply from the application perspective where the SQL statement is built on the fly whether you are using ASP.NET, ColdFusion or any other programming language. But how do you do this from within a SQL Server stored procedure?

How to build dynamic SQL statement in SQL Server

Writing a query with parameters

We will use the AdventureWorks database for the below examples.

Although generating SQL code on the fly is an easy way to dynamically build statements, it does have some drawbacks.

Another issue is the possible performance issues by generating the code on the fly. You don’t really know how a user may use the code and therefore there is a potential for a query to do something you did not expect and therefore become a performance issue. So once again, you should make sure your code checks for any potential problems before just executing the generated code.

i hope its help

A blind sql injection attack is used when which of

Ask: A blind sql injection attack is used when which of the following is true

#I HOPE IT HELP

all programs written in sql are​

Ask: all programs written in sql are​

it is a part of system R

what is the function of sql server​

Ask: what is the function of sql server​

Hope it will help you